During the tours of the Church of Ireland church in The Square, Donabate, Brian Scott will guide visitors through the historic interior and exterior of this fine building which dates back to the 13th. century.

The only remnant of that first stone church, and the monastic community buildings that once existed around it, is the square tower, which served as its watch tower and belfry.

Today a church that was built in the late 17th century and extended in the 18th century stands on the site. As you can see, one unusual feature of the present church is the sundial above the church door. 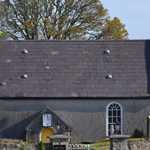 The church is the spiritual home of the Church of Ireland parishioners. The building is large enough to seat just over a hundred people. It has ornate plasterwork ceilings, stained-glass windows, and fine brass and stone monuments, some of which, like the monument in the church porch which was carved in 1592, date back many centuries. The newest part of the church is the East end, where the sanctuary is lit by a fine stained glass window. 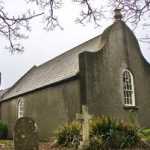 The Cobbes used the tower attached to the North-East end of the church as their private crypt, although some of the more recent family members to pass away are buried in the churchyard.

When the church was extended in the 18th century, the Cobbes had their own private pew constructed in the gallery at the West end of the church, and had the gallery’s ceiling lavishly decorated in stucco plasterwork by the same craftspeople who designed the elaborate ceilings of Newbridge House. The Cobbes’ gallery had their own fireplace and comfortable seats, in contrast to the wooden benches that the ordinary parishioners used. The Cobbes used to have their servants provide them with refreshments during long sermons – allegedly!