The Festival Launch is back on Thursday 8th. Sept in The Brook, Portrane.

Eamonn Galldubh and friends are back and our own local Leithinis is providing the music and you will provide the Craic! 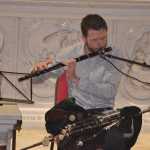 Eamonn Galldubh – uilleann piper
Éamonn Galldubh is an All-Ireland champion with a teaching diploma from Comhaltas Ceoltóirί Éireann as well as a Maters degree in Music Performance with First Class Honours. He learned the traditional piping technique from Dublin pipers Ivan Goff and Mick O’Brien.
Éamonn has performed and recorded with a wide range of artists including Clannad, Riverdance, Moya Brennan, Cara Dillon,Damien Dempsey, Druid Theatre and the RTÉ Concert Orchestra.——-

Eoghan Scott – vocals and guitar
Eoghan studied popular music performance in Ballyfermot College of Further Education and he was part of many different musical outfits during his time there. He has always been a passionate songwriter, and as a singer/songwriter he has played support to acts such as Calexico and Jimmy Webb. He has also played guitar accompaniment with artists on stage like Sharon Shannon, Paddy Keenan, Mary Coughlan, Tommy Fleming, Mary Black, the Irish traditional band Slide.——- 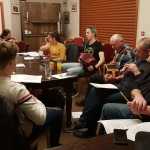 Leithinis Donabate Portrane CCÉ is Co. Dublin’s newest branch of Comhaltas Ceoltóirí Éireann, founded in 2019 and teaching over 50 students of all ages.