Take a Walk on the Wild Side

Biodiversity is the shortened form of two words “biological” and “diversity.” It refers to all the variety of life that can be found on Earth (plants, animals, fungi and micro-organisms) as well as to the communities that they form and the habitats in which they live.
Hans Visser is the Biodiversity Officer with Fingal County Council. In his capacity as ambassador for all things biological, Hans is passionate about his subject, and his enthusiasm for his topic is contagious.
As part of the Bleeding Pig festival in 2018, Hans hosted a Biodiversity walk and talk on Portrane Beach. For 90 minutes on a near-perfect September Sunday afternoon, Hans enthralled his audience with facts about all kinds of everything, from molluscs to volcanoes, and anything in between. Although the event only attracted a small number of participants, everyone who attended learned something new about their surrounding environment and local beach.
On Sunday 15th September from 1.00pm during the Bleeding Pig festival, Hans will host another Biodiversity walk and talk on Portrane Beach. Participants of all ages are invited to join him.
Come along to Portrane Beach on Sunday 15th from 1.00pm and learn all kinds of everything about the Biodiversity of our local seashore. 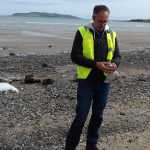 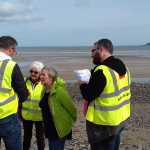 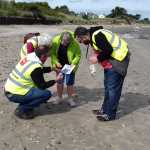