Work is well on the way organising the themed concert during The Bleeding Pig Cultural Festival in September. The Concert is based on the old time music hall variety shows of the Edwardian era and The Good Old Days programme on BBC. …Yes I know …you’re too young etc!

The Concert will take place in Donabate Golf Club on Saturday 14th September.

The Good Old Days will recreate the atmosphere of the English Edwardian and Irish Music Halls and it is hoped that the audience will dress up in the clothes of the period. 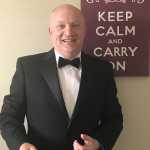 Aengus Gordon is our compere for the night and will introduce the many performers with elaboration and erudition and with elated, exuberant, effervescent and ecstatic exaltations encourage the audience to join in the singalongs.

Performers include –  “Songs of Joyce “ duo Darina Gallagher and Sinead Murphy frequent performers in the Joyce House in North Great George’s St.   Can Can Dancers – Moulin Rouge comes to Donabate,

So join us for a night of a teaming, torrent of tempting talent for your delight and delectation in Donabate Golf Club on Saturday 14th September 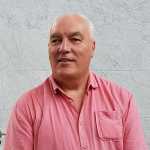 Originally  from Limerick and now living in Rathgar, Dublin.  Fergus sings at a number of Singing Circles in Bray and around the Dublin area. He is a singer of Biddy Mulligan songs (written by Harry O’Donovan and Jimmy O’Dea). 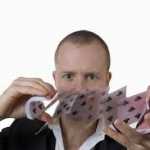 Jack Wise
Magician, ventriloquist, pick pocket and sword swallower, Jack Wise is one of Ireland’s leading entertainers. Specialising in a unique combination of comedy and magic, Jack will have you on the edge of your seat & trying not to fall off laughing. Many Magicians master sleight of hand magic tricks but few develop any real comedic talent.
Jack Wise has accomplished both!
For over a decade Jack has entertained sophisticated audiences with his razor sharp wit and jaw dropping magic. 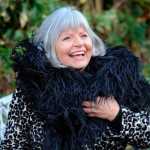 Susie Kennedy
Susie Kennedy, who comes from Chicago, has an MA in Modern Drama and has worked in Dublin for the past 25 years as an actor, singer, director and teacher.  She was an Assistant Lecturer in Drama at DIT Conservatory of Music and Drama. She has directed for the National Chamber Choir, Opera Theatre Company and Guthrie Theatre with Joe Dowling in Minneapolis, USA. She was Artistic Director of TEAM Educational Theatre Company for five years.
As an actor, Susie has performed with numerous theatre companies in Dublin and on tour, including Project Theatre Company, Smock Alley and Passion Machine, appearing in Project, The Peacock, The Olympia, The Gaiety, and Focus Theatres. She has also performed frequently on TV and radio, Susie has produced and performed musical plays and jazz/blues reviews, including, You Can’t Deep Freeze a Red Hot Momma, Would the Real Judy Garland Please … and, Wild Women Don’t Have the Blues, Come Up and See Me Sometime, Forever Fats.
In her latest show, As Time Goes By, Susie explored through song and story, the ups and downs, the hilarity and challenges of being ‘an older woman’.
She created thoughtful, moving and sometimes hilarious theatre as she looked at the way people try to stay young, how memory and the figure go and how excitment can come through on-line dating for the over 65’s 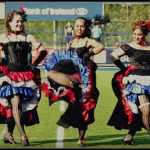 From Moulin Rouge to Donabate
The Can Canan is a lively and risqué dance of French or Algerian origin.
Known for its high kicks in unison that exposed both the petticoat and the leg, the cancan was popular in Parisian dance halls in the 1830s and appeared in variety shows and revues in the 1840s. 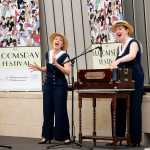 Darina Gallagher and Sinéad Murphy present “James Joyce’s Dublin in Song.”
Darina and Sinead have been enthralling and delighting audiences with their Joyce – based shows for many years and have performed musical shows based on his works in Ireland and abroad. Their production ‘Songs of Joyce’ brought them acclaim, not just in Ireland, but also in the UK, USA, and Russia.
Their show features a selection of the music hall standards, folk songs, sea shanties and operatic numbers that are an essential element of Joyce’s work.
They are frequent performers at The James Joyce Centre in North Great George’s Street. 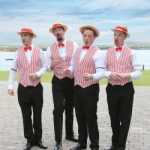 Award-winning 4 IN A BAR is one of Ireland’s most loved vocal ensembles. Eoin, Tristan, Paul and Shane – proud holders of the IABS International Male Voice Quartet Award (and five-time Gold Medal winners) – combine a passion for close harmony singing with their interest in Ancient, Classical, Irish traditional, barbershop and pop music.
4 in a Bar has released two vocal harmony albums, both featuring arrangements by Eoin Conway. The second – ‘Hide and Seek’ – was awarded ‘Album of the Week’ on RTÉ Lyric FM. 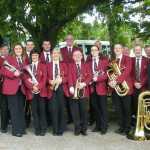 The Blanchardstown Brass Band is one of the oldest bands in Ireland. The band have been performing at events and venues around Dublin and beyond for 193 years now
The Band’s repertoire includes Marches,  Overtures, selections from the Musicals, popular & novelty items and of course Irish and International music.
It has appeared on national television and played on national & local radio and appeared in the final scene of the film The Purple Taxi.
The Band has become a regular performer during the Festival and at our Winter Miscellany.